Building on hundreds of thousands Sigma XT sales in nearly 90 countries, the Sigma ZXT provides controls and indications for a single-area extinguishing release system, enabling targeted extinguishing that limits damage and reduces costs. Three conventional detection zones provide the alarm ‘trigger’ required to activate the release of extinguishant, and the system can be configured to release the extinguishant on an alarm from any single zone or combination of multiple zones.

A new feature on the Sigma ZXT is the event log which records event data from the panel such as alarms, faults, configuration changes etc. along with a time and date stamp. This historical visibility is critical for diagnostics, identifying the cause of alarms and faults, as well as reasons for activations. Up to 1000 events can be stored within the panel which can be viewed through the LCD or can be downloaded and saved using Kentec’s LE2 software.

The system, compliant with EN12094-1, can also be configured to provide two extinguishing outputs, either working together as common outputs or as main and reserved outputs. The latter results in the connection to two sets of extinguishing gas cylinders, which enables the customer to return a system to a functional state, quickly, following a release.

Alien Systems and Technologies, based in South Africa, was one of the Kentec Authorised Distributors (KAD) involved in the BETA testing. It installed the Sigma ZXT at a Motor Control Centre (MCC) substation with a total of 15 Pyroshield IG55 cylinders and an Oil Lubrication Room using a Pyrostorm dry chemical powder automatic extinguishing system. Grant Wilkinson of Alien Systems and Technologies says the customer originally ordered Kentec’s Sigma XT panels, but was so taken by the ZXT’s extra features they decided to upscale:

“The key selling point was the secure event logger, and also compelling was the option of a programmable second actuation circuit meaning the customer can add rooms to the fire protection system as and when required.”

Summarising the business’ take on the ZXT, Grant adds: “Most of us here are Star Trek fans, you can see by the name of the company. I always like Romulan War Bird Disruptors. Now Kentec has a disruptor and it’s called the ZXT.” 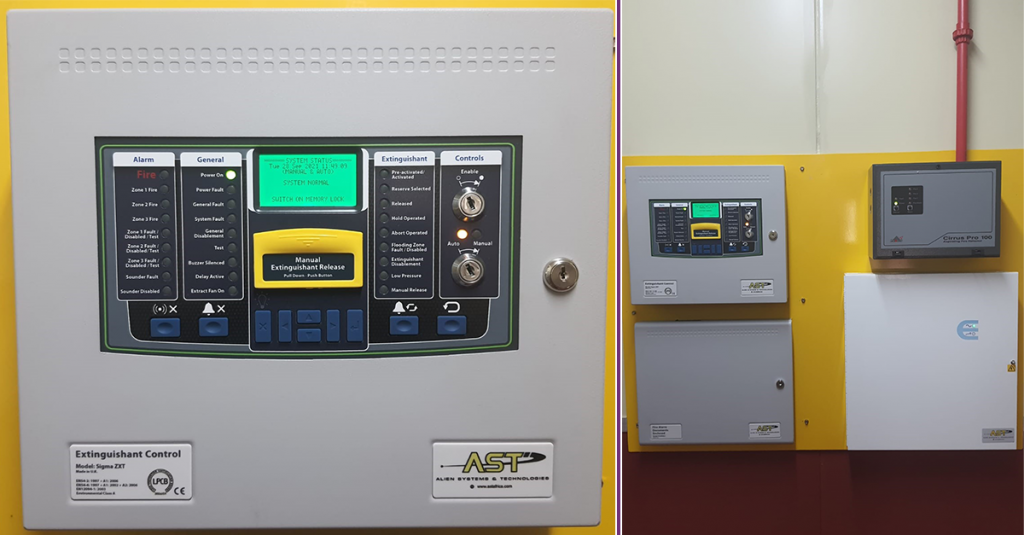 Kevin Swann, Managing Director at Kentec, says the Sigma ZXT supports Kentec’s goal to manufacture products that make the lives of its customers easier, and they are thrilled, but not surprised BETA testing has been such a success:

“It is fully programmable through the front fascia, with clear password and access menu structures for easy configuration,” he says. “With straight-forward separate access for users and engineers the product is designed to be easy to use for both installer and end user. Single-area functionality enables targeted extinguishing that has clear cost benefits for the occupying business.”

A sophisticated, dynamic LCD, which supplements the LED status indicators, provides detailed information on panel status including fault conditions, alarm conditions and extinguishing release countdown. If dynamic mode is chosen, the display changes colour in relation to the panel status, providing immediate and clear visibility of status conditions. While not in dynamic mode, the LCD will be white regardless of status.

“To support our existing Sigma XT customers and the range’s market leading position, the Sigma ZXT is fully backward compatible with the existing SI status units, as well as the ancillary output card,” Kevin adds. “The Sigma ZXT is a complementary development, designed to build on the popularity of the Sigma XT range.”

A range of new status indicators that match the look of the Sigma ZXT panel fascia are also being launched, which are again fully functional with the Sigma XT range. Status units can be located at any access point to the risk area notifying approaching persons of system status, as well as providing optional Auto/Manual key switches and Manual Release pushbuttons.