Local Dartford MP, Gareth Johnson, has officially opened a new extension at Kentec Electronics, the manufacturer of life-critical fire control systems, enabling the firm to expand its manufacturing, dispatch and stores capability by a third.

The extension not only enhances Kentec’s core production capabilities, but also adds further capability to its ‘Specials’ Department for niche and complex projects, such as those delivered to historic buildings or even yachts.

Gareth says he is thrilled to witness Kentec’s achievements: “Kentec has grown considerably over the last thirty-five years to become one of Dartford’s top 10 employers and it was fantastic to see how the new production space is furthering its business goals. Kentec is one of the big success stories of the area.”

Kevin Swann says he was honoured to have had Gareth Johnson officially open the factory: “I was particularly pleased that Gareth took the time to talk to many of our great people on the tour and showed a real interest in their work and lives. We are very proud of our accomplishments and excited to showcase the new factory extension. It was an excellent day that has given the whole team encouragement and confirmation that efforts have been very much worthwhile.”

The official opening followed a virtual launch that took place in July 2020. 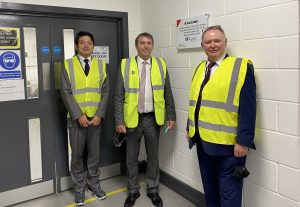