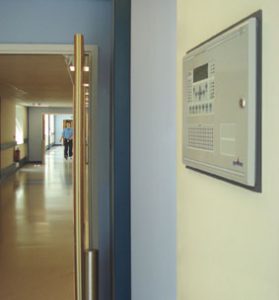 A new fire system designed to tackle a chronic false alarm problem at Stoke Mandeville Hospital in Buckinghamshire – home to the world renowned National Spinal Injuries Centre, has been hailed a resounding success with an 80 % drop in incidents in its first year.

Fire systems specialists Pyrotec Systems Ltd, appointed for the design, installation and maintenance of this massive Private Finance Initiative (PFI) funded re-development, chose an open protocol system that interfaces with Kentec Syncro AS control panels, as they offer both versatility and a very high level of intelligence, allowing more accurate interrogation and interpretation of possible fire events within the hospital.

Buckinghamshire Fire & Rescue Service explained: “It was a serious problem for both organisations. Every time their alarm system activated, our risk-based response would be to send two fire appliances. Invariably on arrival we would find it was a false alarm – a single smoke detector being activated, usually by a cooking activity. More often than not it was burnt toast!

“As well as placing a burden on our resources, it was disruptive for staff and patients and it destroyed the credibility of their fire alarm system.”

Working with the local NHS Trust and Ray Clark, Stoke Mandeville Hospital’s fire safety adviser, the hospital’s fire alarm engineers Pyrotec Systems developed a fire safety system that enables the hospital’s specially trained fire wardens to investigate the cause of an alarm signal, on the activation of one smoke detector, that either confirms or cancels the 999 call. Guaranteeing that a 999 call is made in the event of a real fire.

This open protocol system consists of 28 Kentec panels and 5000 Hochiki devices, allowing seamless integration to a Building Management System that provides fire data intelligence for fire alarm management at many levels. These include connection directly to the telephone exchange, and provision for future expansion of the PFI development.

One of the main requirements of the new system was clarity of distributed intelligence, with the system required to give a view of the whole system at each control panel so allowing an alarm or fault on the system to be viewed locally.

In addition, with one single comprehensive system throughout the complex, training in fire safety is much simplified as nursing staff readily understand the system wherever they are located on the site. Clarity of zone identification is a major feature of the system. The HTM82 regulations stipulate that a fire alarm must be monitored by a person who, when calling the brigade, must be able to indicate the zone in which the fire has occurred, so the gate closest to that zone may be entered.