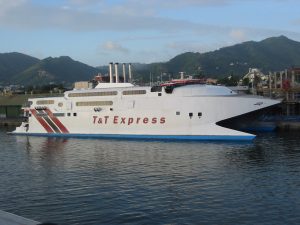 Kentec, one of the worlds leading manufactures of life safety systems, has had its Syncro ASM ﬁre control panels chosen for the refurbishment of ﬁre systems on the the fast ferry service that operates between the islands of Trinidad and Tobago.

Since its inauguration in 2004 the fast ferry service between Port of Spain and Scarborough has become the popular choice for vacationers and people traveling daily between the islands of Trinidad and Tobago. Two passenger fast ferries, the T&T Express and the T&T Spirit service the route with a 7 day a week schedule, completing the 20 mile journey in around 2 1/2 hours.

In fact, T&T Port Authority is so impressed with the new Kentec Fire Alarm system, in particular its ease of use and ﬂexibility of operation, it has decided to upgrade the T&T Express’ sister ship, T&T Spirit, with the same equipment. Installation is due to commence in April this year.

Suitable for all small to medium sized vessels, Syncro ASM control panels can be expanded and networked to become part of much larger systems if the need arises, therefore providing a future proof solu?on for any vessel. With its large graphical display and ergonomic buVon and indicator layout, the Syncro ASM control panel is simple and straigh_orward to understand for installers, commissioning engineers and end users alike.